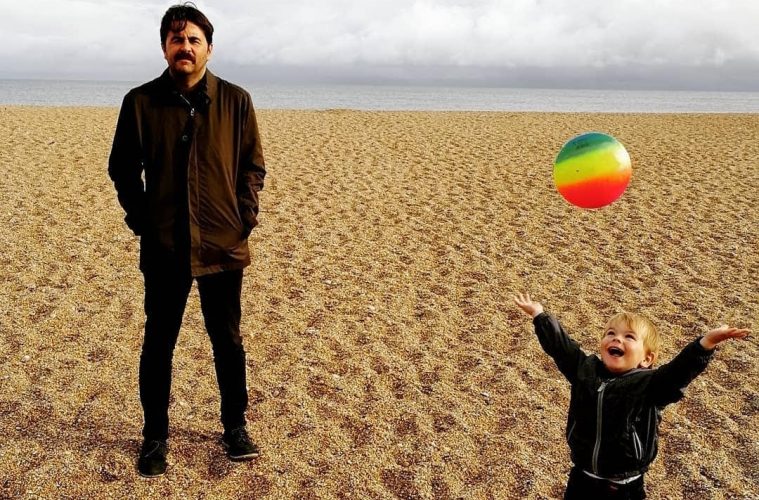 Gabriel Moreno is a very well known name in the London poets circle.  A troubadour in the strict sense of the word, he is a poet and a song writer who not only performs regularly in the few bars and pubs where poetry is welcome but also helps to promote the work of other poets and musicians. A Gibraltarian by birth, he has always inhabited a bilingual world. Here, in a extract of his forthcoming book, he ponders about the responsibilities and doubts of how to cultivate the language of Cervantes in Dante, his three year old son.

I am failing miserably at teaching my child Spanish. Everyone keeps reminding me I should do it now. They say three is the perfect age for a toddler to absorb a new language. They claim that this inference of information will shape his neurological synapses allowing him to develop a more flexible and competent brain.

But Spanish is a language for the sun. It is hard to go around rainy London babbling nonsense in the tongue of Cervantes. I feel like a fraud. I want an arid landscape, a dry mountain, an olive tree, a bar on the beach where sardines are fizzling languidly on the grill, a fat man sweating in a communal porch. Words like crepúsculo sound fake here.

It is like if I were detaching my son forcibly from his environment and urging him to partake of a reality he has never experienced. Every language is a philosophy of life or so they say but can you perceive this vision of the world when the words are severed from the land which infused them? Sometimes I think I should elope with my child to Salamanca, hang around in its streets of red clay or inhabit the insomniac terraces of Madrid where fried calamari and vino tinto make for the spirit of the landscape.

The two of us against the spectre of englishness, absorbing more than a thousand years of overexcited bulls and aromatic bay leaves. I would then teach my son to say sardina or laurel. Perhaps our accents might change. I would point to the slice of cheese and say Manchego without breaking into laughter. The Spanish cheese they sell in Asda is an insult to humanity. It should not even be called cheese.

But my friends and family are right. I am missing the chance to expand my child’s consciousness. I am failing to open a window for him to alternate realities. I am preventing him from developing a more advanced perception of the world. Jez condemned me from the beginning. He claimed I was committing a crime by failing to teach Dante Spanish. He sentenced that my neglect should be punishable by law. I told him his parents should be handcuffed too for not teaching him the first thing about poetry. Poetry which transcends language, poetry which is the tongue of the Gods, poetry which redefines reality, poetry which is what we use when communication reaches its ultimate ceiling.

In truth, the theme of language and parenthood was making me act irrationally with Jez. My guilt was doing the talking in the matter. I had to consider the possibility that I was a deficient father, a shoddy excuse for a parent. The drinking was one thing but to rob him of a tongue was a deplorable affair. The boy had done nothing but expand my sense of self and the bulwarks of my consciousness.

My defences shatter. I am undone. Three words is all it takes for forty years of psychological construes to disappear. My whole psychic life resumed in an infant’s sentence. The totality of my identity in the planet. He says it joyfully sometimes throwing his arms into the air; spreading his tiny perfect limbs like a flower blossoming in time lapse. Poetry. Like if the word itself was a process of discovery and of movement. He smiles and laughs aware of the farcical nature of the whole affair. Yet there is no doubt or dirty intellectual cynicism in what he utters.

Why can’t I express myself when I am asked about my profession? Why can’t I say: Daddy sings poetry. Why the torturous questioning? Why the thousands of years of wrestling with the blank page? Why the sleepless nights wondering whether delusion and arrogance were the only motivating factors of my endeavour? Dante could resume it all so perfectly, so concisely, so joyfully: “Daddy sings poetry.”

Watch Lena Kalinka by Gabriel Moreno and The Quivering Poets